Getting high with strangers on Zoom didn’t sound like fun. Then I did it

in News
Reading Time: 4 mins read
A A

The box delivered to my door, artfully decorated with colorful flowers and strange creatures, is curious enough. The directions that accompanied it are even more so. While I’m welcome to peruse the contents of the box, I’m told to refrain from consuming anything within. In a few hours I would receive an email containing a link to a Zoom meeting. At the appointed time, once I had the box and a few household items at the ready — an ice-filled glass, a bottle opener and an ashtray — I am to click into the meeting and open the box.

At precisely 7 p.m. on the last Thursday in June, I click the link, flip open the box and find myself joining a virtual salon — part cocktail party, part smoke sesh, part buzz-building, brand-awareness event — for the recently launched L.A.-based cannabis brand Drew Martin. Joining me are a handful of SoCal creatives that included, in no particular order, a documentary film director, three fashion designers, a pair of comedians, a singer, a magazine founder, a pastry chef and the brand’s founding trio. Over the next hour, the three would raise cocktails, light botanical-blend low-dose joints and nibble artisanal chocolates — encouraging the baker’s dozen of us to do the same using the contents of our boxes — as a way of introducing their take on weed to the world.

It wasn’t really supposed to happen like this, the founders would explain as the evening went on.

Given their backgrounds in the hospitality space, the original mid-May launch was supposed to be accompanied by a series of 40-person — and in-person — sit-down dinners, where their four varieties of pre-rolled joints would be meticulously paired with complementary food and drink, all of which would be sampled by the kind of celebrities, celebrity-adjacent influencers and high-profile friends of the brand that can mean the difference between a moon-shot launch and fizzling on the launchpad.

Then the coronavirus outbreak permanently scuttled those plans, forcing them to pivot to Zoom. (Full disclosure: Times owner Dr. Patrick Soon-Shiong is an investor in Zoom.)

During the last four months there have been more than a dozen such Drew Martin salons, and it appears the approach has been bearing, at least, some fruit. Sweet Flower’s Melrose Avenue dispensary, where the brand launched exclusively in May, sold through its initial order in a month. (Distribution has expanded since; a list of current stockists can be found on the Drew Martin website.)

Some of the salons, like the one I find myself in, have been small and intimate; others — like the one at the private West Hollywood club San Vicente Bungalows that included interactive cocktail mixing — were larger affairs. All told, the salons have introduced the brand to an estimated 250 people, most of them in the privacy of their own homes. 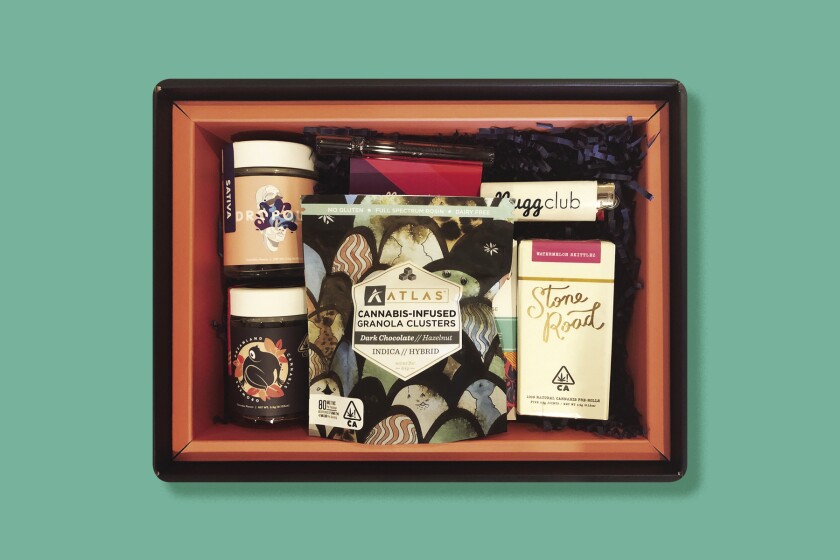 Even if you’re a cannabis enthusiast, the notion of getting high with a bunch of total strangers on videoconferencing during a pandemic probably doesn’t sound like an awful lot of fun. There’s something inherently sociable about marijuana consumption that makes the prospect of a shelter-in-place, pot-party-of-one feel forced almost to the point of silly — even if a dozen other people are doing the exact same thing on the screen in front of you at the same time. (That’s why I am beyond skeptical when the time came for me to boot up, log on and fire up.) What follows are excerpts from my cyber-salon adventure.

7 p.m.: Seated at my dining room table, with my box in front of me, I briefly worry if I’m dressed OK. I click through and watch the other guests arrive. The Zoom grid quickly fills, each square popping to life like a Technicolor popcorn kernel. People I haven’t met yet adjust themselves on overstuffed couches, patio furniture and wheeled office chairs in dimly lit living rooms, lush, leaf-framed porches and minimalist spare bedrooms. The default expression falls somewhere between excitement and bemused wariness.

7:04 p.m.: The PR handler — the salons are part of brand launch strategy after all — does a speed round of introductions. Sharing a square are the three Drew Martinites; mixologist-herbalist-brand namesake Drew Martin Gosselin, his partner in and out of business Andrew Freeman, who heads up marketing and branding efforts, and the brand’s Chief Executive Nicholas Pritzker. Also on hand on behalf of the brand are Manuela Sanin (former executive pastry sous chef of Eleven Madison Park restaurant) and James Bailey (a brand investor), whose wife, model and actress Devon Aoki, would pop in and out of view over the course of the evening.

The post Getting high with strangers on Zoom didn’t sound like fun. Then I did it appeared first on L.A. Cannabis News.

How to find the legal weed stores opening Feb. 6 in Missouri

What are cordyceps mushrooms? Can they really turn their hosts into zombies?