Global Pandemic Forces Jamaicans Out of the Closet on Cannabis Use

CANNABIS CULTURE – Jamaica has long been associated with cannabis. Reggae music, Bob Marley, Dreadlocks all celebrate the use of the ganja plant. Yet what most foreigners dont know,  is cannabis use is frowned on by most Jamaicans.

The remnants of the decades-old, US-led “War On Drugs” still resonates in the psyche of the island. The cultural propaganda, coupled with the Christian backbone of Jamaican society, leaves many still believing ganja is the “devil’s weed” and drives people insane.

The Rastafarian Community was demonized for their social, religious and political views, so their Sacramental use of the plant added further fuel to the stigma that endures to this day. In a recent study by TheWeedBlog.com, Jamaica ranks in the lower half of the top ten in the “Cannabis Friendliness Index”. Coming in 8th position with a total score of 100 points out of 250. Bear in mind, Jamaica picked up 50 points simply for legalizing medical cannabis.

For the remaining data points, Jamaica would have scored just 50 points for the prevalence of use, which according to the report, stands at 7.2%, citing the United Nations Office of Drugs and Crime (UNODC) as the source of consumption information.

On the surface, Jamaicans are very tolerant of cannabis use, but the stigma remains. US and international media have had the same impact on the minds of Jamaicans as it had on their own and much like in the US and Canada, perceptions are still in need of change. In the midst of the Covid-19 pandemic, Google searches for CBD products and related information have spiked in Jamaica, trending similar to searches for Coronavirus and Covid-19. Querries increased 20 fold during March and April and the trend is continuing. April is now noting a significant uptick in online queries for CBD, and related topics, in particular, ganja tea.

Unfortunately, ganja’s taboo still also stifles people’s access to the plant and by-products. Even in the wake of decriminalization and the availability of useful information on cannabis and its medicinal qualities, many Jamaicans limit their own access. Now, in this period of self-inoculation from social contact, some of the canna-curious are taking advantage of time away from the workplace and limited public activity. “We’ve seen a lot of what I think is secondary purchasing, that is our customers are buying for legal aged friends and relatives who don’t want to be seen walking into a dispensary”. According to Rainier Gaubault, a marketing consultant at Jacana, a new dispensary in Manor Park, Kingston. Essentially customers and patients are pooling money together and leaning on cannabis to aid them through this time. While some consumers may be stocking up, local dispensaries are seeing a difference in spending habits. The new social restrictions may be the catalyst for a shift in the local marketplace.

The legal cannabis industry in Jamaica does have an ally on their side in the Government established body, the Cannabis Licensing Authority (CLA). Through an interim provision and aligned with markets across North America, dispensaries and herb-houses have been deemed an essential service. The provisions cover solely the distribution of ganja products within Jamaica. The statement reads, “In the context of the Disaster Risk Management (Enforcement Measures) Orders relative to the COVID-19 pandemic, herb houses may be deemed a business that offers retail services for the provision of medicine. As such, any exemptions given to these retail services under these Orders may be considered applicable to retail herb houses”. 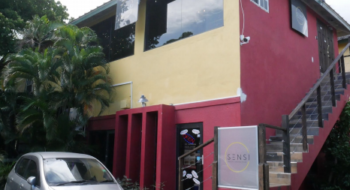 During this period, most businesses remain closed, while others have restricted opening hours. The entire population is under changeable curfew times and most people are self-isolating. Included in the provisions are curb-side pick-up and deliveries to existing patients. Most notable is the provision allowing for online orders. If this continues post-pandemic, this will change the entire landscape of the local Jamaican cannabis marketplace. With more potential consumers turning onto the benefits of CBD, there will be an entire shift in the local customer base.

According to a Financial Gleaner report, “In January, marijuana wholesale sales from farms to retailers amounted to US$54,500; in February sales peaked at US$123,400; that dropped to US$47,500 in March, and fell even further in April to US$18,000. Comparative numbers for 2019 were not immediately available”. In January and February Jamaica is traditionally in the

height of the tourist season. Tourism contributes to over 30% of Jamaica’s GDP and employs directly or indirectly, over a third of the workforce. The April figures reflect the local market, during an economic downturn.

This is the first time since the easing of laws governing our lives and cannabis use, that all of humanity is encountering a health crisis and cannabis is playing a part. People have their health on their minds and CBD is becoming more widely accepted as a medicine that can be taken to beef up one’s immune system as scientists and biologists grapple to find a cure or appropriate vaccine for Covid-19. Healthcare is trending globally, Dr. Lakisha Jankins a Traditional Naturopath, Registered Herbalist and advocate for regular supplemental use of CBD and CBG, recently launched a line of CBD products, branded after her namesake. “When you think of cannabis culture, it’s 100% Jamaican”, but “there is an educational disconnect amongst the professional class of Jamaicans. If people knew that our bodies have endogenous endocannabinoid systems, they would start using CBD”.

She continues, “there are not enough tourists that come through Jamaica to support an entire dispensary infrastructure, the bulk of your customer base will be people having an ailment or geriatric. You have to cater to them. In fact, recent studies have indicated the prior to the pandemic, the steadiest growing segment of the population using CBD or cannabis was those aged 65 and older.”

One finds predominantly a selection of dry-herbs in local dispensaries and herb-houses. A licensee needs a separate license in order to process marijuana into oils and other products. This is changing as more processing licenses being issued and products are making their way to dispensary shelves. Local producers have responded to requests and many do have CBD products or strains with higher levels of CBD available. Sensi Medical Cannabis House has an in-house strain they recently released in an oil. Island Strains in Montego Bay recently followed suit.

Consumption methods are also limited. Currently, in Jamaica, edibles reside in a grey area of legality. They have not been formally deemed illegal but are also not legal in the eyes of many authorities. Effectively, there is no specific legislature governing ganja edibles, but the authorities have publicly stated their opposition. Making some headway in the industry is Itopia Life. One of Jamaica’s newer herb-houses located in Kingston. They just released their own branded line of hemp-seed products. They had to get clearance from the CLA and the President of Itopia Life, Joan Weebly, boasts they are the first in the country to be allowed to sell a hemp-based edible product. Despite Jamaica’s hard-earned title of being a Ganja Nation, it remains much like the rest of the world, education, past-perceptions and long-held stigmas still hold the industry back. We still have a lot of work to do.

Why is Cannabis Still Illegal in the UK?

I Just Moved in With My Partner; How Can I Still Smoke Without Stinking up the Place?