Why NY college students support legalizing marijuana and use CBD

in Science
Reading Time: 6 mins read
A A

This is part of a Syracuse University student-driven reporting project through the NewsHouse website that is being published in USA TODAY Network. It takes a deep look at marijuana issues in New York as the state’s drug laws remain in flux.

Isabella Uribe hunched over the toilet. She was just a sophomore in high school, but she had been here before, most weekends in fact. The culprit: too much cheap vodka at the clandestine party in her friend’s basement in suburban Florida.

“My body is crying,” she remembers thinking as she gasped between heaves.

By her junior year in high school, she was done with booze. She put down the bottle and picked up a joint instead.

With the change in her recreational drug of choice, she says her headaches decreased, her cramps lessened and her stress levels fell. She’d get high in her room and paint surrealistic visions.

She hid her use from her parents, who saw marijuana as a gateway drug to harder and more dangerous substances.

“My parents believe that if I smoke one joint, then I’m going to be lost forever,” Uribe, now an advertising freshman at Syracuse University, said.

But Uribe’s beliefs were set. Marijuana was safe. It benefited her life more than it detracted from it. Marijuana should be legalized.

Many of Uribe’s classmates share her point of view, a NewsHouse survey of more than 250 New York college students found.

More than 90% of respondents to that survey said recreational marijuana should be legal in the state. The NewsHouse survey also found widespread use of cannabis products, including CBD, on New York college campuses.

Students are far more concerned about the effects of alcohol and cigarettes on health than they are about marijuana, the survey found.

Many of the survey respondents indicated they would like to take courses on marijuana and the cannabis industry, something several Empire State colleges and universities have already experimented with.

The survey is unscientific in that it used “snowball” sampling – tweets, emails and pleas to others to pass on the questionnaire – and is heavily weighted toward Syracuse University students.

But a broad range of students took the survey, including participants from 10 of SU’s 11 colleges as well as students from 13 other New York universities. Both undergraduate and graduate students responded to the survey. Fifteen respondents were international students from 12 different countries.

In his January State of the State speech, Gov. Andrew Cuomo called for the legalization of the drug, renewing a legislative debate that ended the year before with an agreement to decriminalize rather than legalize.

The state appeared ready to make the big change this year, but the COVID-19 epidemic derailed those talks when several state lawmakers fell ill.

Legal weed is now off the table for 2020, and New Yorkers will have to wait at least another year the law to change. 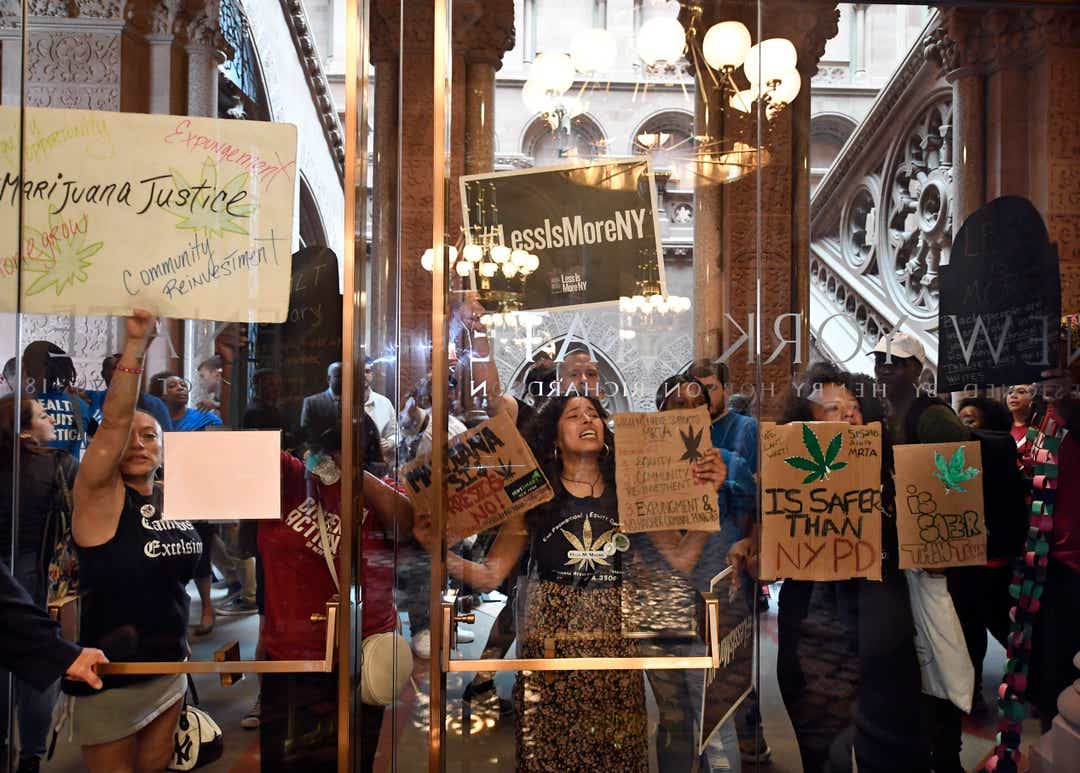 An overwhelming majority of college students favor marijuana legalization, according to The NewsHouse poll.

The general population, however, seems a bit more split as other surveys have found that New Yorkers as a whole are split on the issue.

A poll published by Siena College two weeks after Cuomo’s speech, for instance, found that 58% of registered New York voters approved of the governor’s proposal to legalize.

Law enforcement, religious groups and some education associations have all pushed back on legalizing marijuana in New York, saying it would lead to more people driving impaired and push more young people to the drug.

“We call on the governor to listen to public health and safety associations across the state, including the medical society and county health officials who, for the last year, have denounced the push for legalization,” Kevin Sabet, president of anti-marijuana group Smart Approaches to Marijuana, said in January.

Enactment of that proposal would almost surely increase the amount of marijuana smoked on college campuses.

An Oregon State University study on marijuana usage rates found that college students in legal states smoke 23% more than in states where marijuana is illegal.

Seventy-nine percent of students who responded to The NewsHouse survey agreed that legalization would increase the number of marijuana smokers.

But two-thirds of respondents also predicted that legalization wouldn’t significantly affect campus culture, perhaps because 83% already know someone who has gone to class stoned.

“I’ve been allowed to smoke at any party,” Uribe said of mixing pot with socializing at SU. “This won’t change that.”

Most students surveyed see the effects of marijuana as benign compared to alcohol and tobacco. Of student respondents, 47% are not concerned about marijuana’s effects on their health at all, while 46% are “very concerned” about cigarettes’ health effects.

More: Will New York legalize recreational marijuana in 2020? These obstacles stand in the way 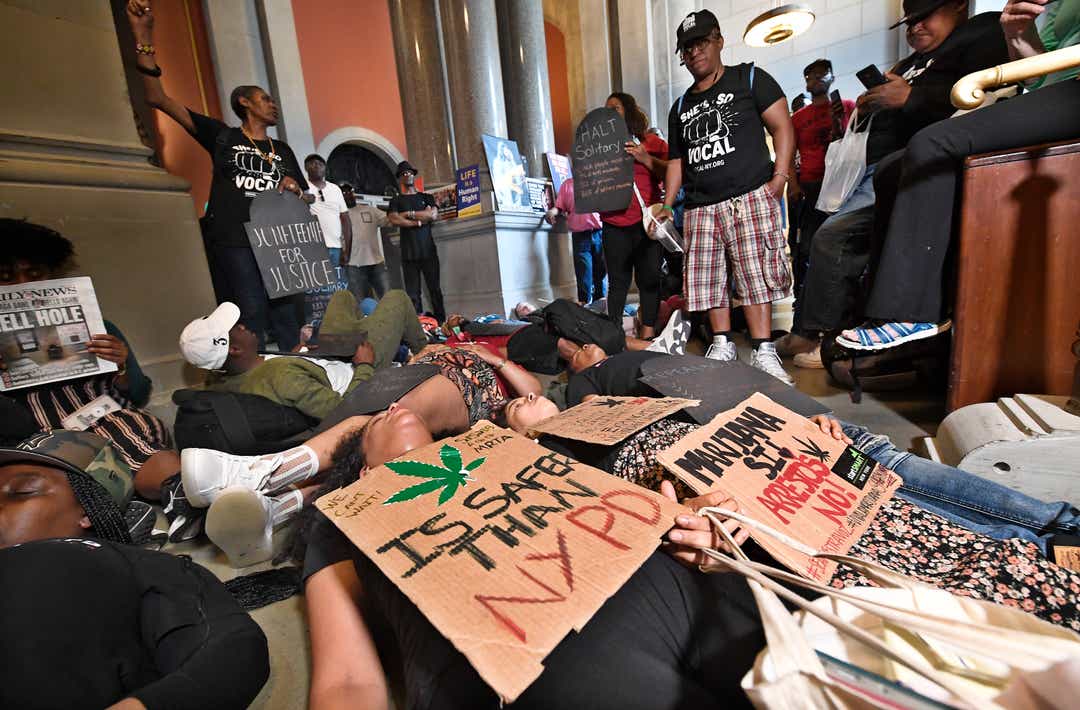 Gretchen Coleman, a sophomore political science and political philosophy major at Syracuse University, thinks that recreational marjiuana should be treated like alcohol: legal, but with limits.

She watched as lines to get the substance stretched around the block in her Chicago suburb this January.

The state of Illinois voted to legalize marijuana last year, and the first dispensaries opened Jan. 1, 2020. She says people stood in line for hours to get their marijuana fix.

She just drove by, though.

Smoking has never interested her, but she hopes New York follows Illinois’ legalization this spring. She was one of 47 respondents who said they came to college in New York from states where recreational marijuana is fully legal.

Some students in New York have already found legal relief in the green plant.

Joseph Livshin, a public relations senior at Syracuse University, took pills prescribed by U.S Department of Veterans Affairs for seven years to help with migraines induced by post traumatic stress from his time in service.

But since the introduction of medical marijuana in New York, Livshin has used cannabis instead.

“The plant works way better than the pills did,” Livshin said.

Now he regularly travels down to Erie Boulevard in Syracuse to stock up. Only 3% of respondents reported ever being prescribed medical marijuana.

But for Livshin the switch to the plant came too late. He still has regular doctors appointments to deal with kidney problems, a result of the pills doctors prescribed, he said.

Livshin said he wants to combat the idea that marijuana causes mental health problems, and three-fourths of students surveyed agreed with him.

Yet more research is needed, Livshin said. A combination of public and private money should be funding projects that research and communicate the benefits and side effects of the drug, he added.

Two-thirds of respondents said they would sign up for such a course involving marijuana.

Universities in Colorado and Maryland have begun programs involving marijuana, and Cuomo also proposed creating a Global Cannabis and Hemp Center for Science, Research and Education at SUNY schools in his January speech.

Amanda Gordon, a 28-year-old digital media senior from one of those SUNY schools, supports legalization, but she is nervous about how the state will deal with those already affected by the war on drugs.

Gordon wants the law to go even further, ensuring that tax revenue made from the recreational sales is put back into the communities most affected by the policing of drugs.

“If the taxes aren’t going to the communities that were hit hardest by the policing,” she said, “I’m going to be pissed about it.”

310 students from 14 New York colleges answered parts of the survey, with most questions getting 255-260 responses.

The survey opened Nov. 4, 2019. The last response included in the analysis was registered Jan. 28, 2020.The survey used snowball sampling and the data is not appropriate for inferential analysis.

Why does cannabis keep some people skinny? Experts explain how weed and metabolism are connected